The main purpose of car doors is to give protection to the entrance of the car and the contents of the vehicle. You will find different types of car doors.

A conventional car door opens and closes in a way familiar to most people. The door has two panels, each with a hinge at the top and bottom.

Look at these 12 different types of doors on all kinds of cars, from small sports cars to full-size vans. 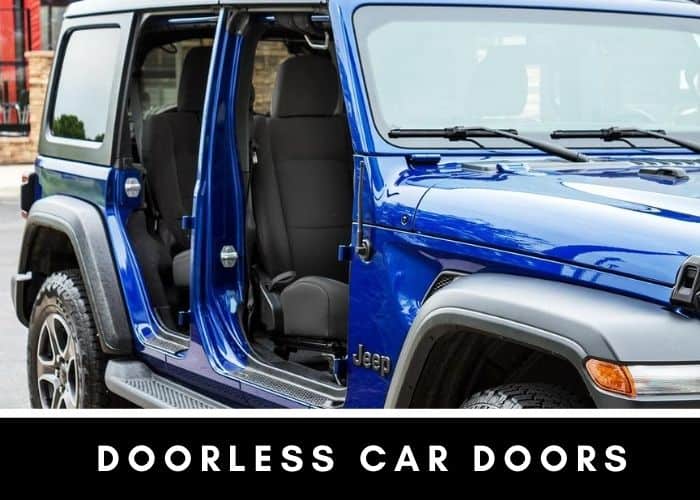 A car door consists of a hinged or sliding section that opens upward, outward, or forward.

Scissor doors are a fairly common sight in exotic cars, and you may have seen them before. But what is it about these hinged doors that make them so distinctive?

The most obvious difference between scissor doors and other types of doors is where the hinges are. Instead of being on top, they’re at the bottom.

It allows for some pretty dramatic openings—and equally dramatic closing sequences. But why do car companies implement this system?

So, to make your life easier (and avoid wrist injuries), manufacturers began experimenting with new ways to open and close their vehicles’ entryways. 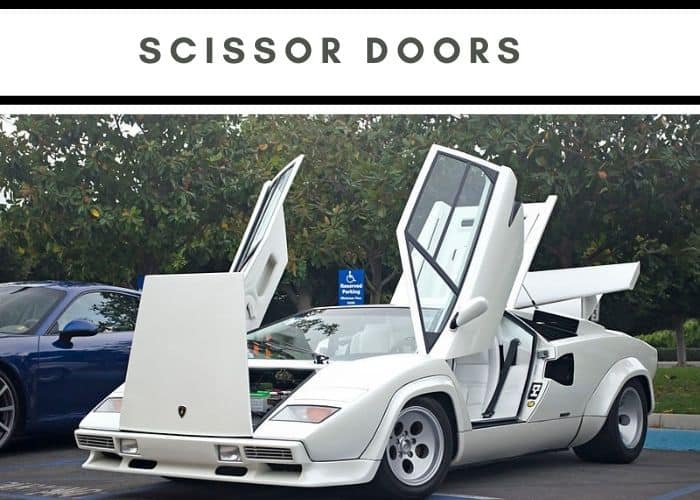 Here are types of cars with scissor doors:

You’ve probably never heard of a suicide door, but you have seen one. This type of car door has two doors on each side of the car, one in front and one in back.

The first time I saw this type of door was on a bus, which is why this type is also called bustle-back.

Suicide doors open from the back, so they’re pretty cool looking when they swing out toward you. 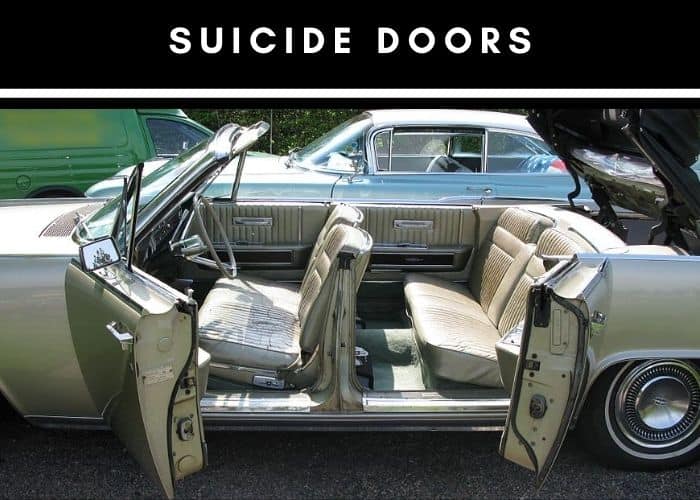 Here are types of cars with suicide doors: 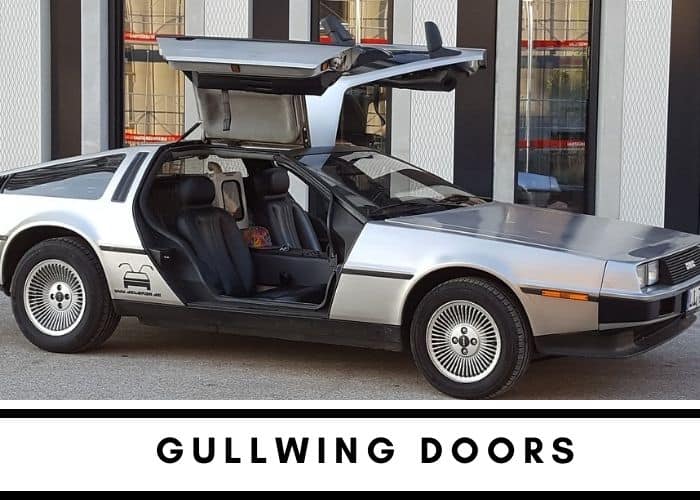 Here are types of cars with Gullwing doors:

The butterfly door is one of the most iconic features of a car, and there are plenty of different types of cars with butterfly doors.

You can often see it on sports cars and expensive models like Lamborghinis, Ferraris, and Porches. 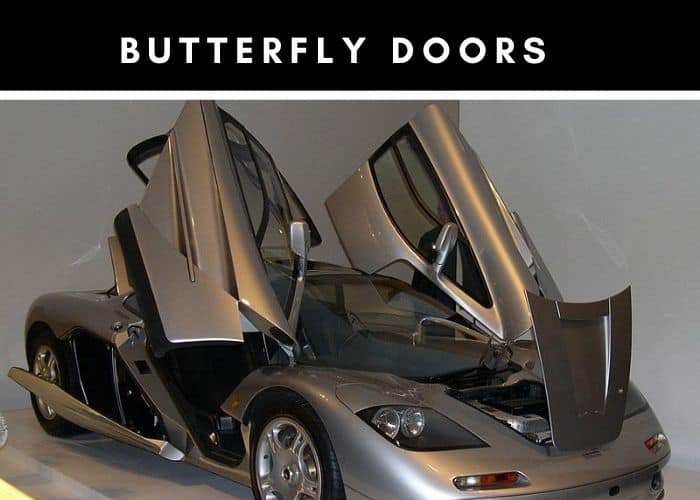 Here are the types of cars with butterfly doors:

Reverse opening doors are a type of door that opens in the reverse direction from standard doors.

You can find them on the rear of buses and trucks, but they’re also on some commercial vehicles such as vans, tractors, and mobile homes.

There are two basic types: sliding and folding.

Sliding doors open like typical car doors by sliding horizontally along tracks on either side of the vehicle; folding ones use hinges to swing out vertically from their tracks when opened.

The main advantage of reverse-opening doors is that they allow passengers to get off a vehicle without walking around it first, which makes loading cargo much faster. 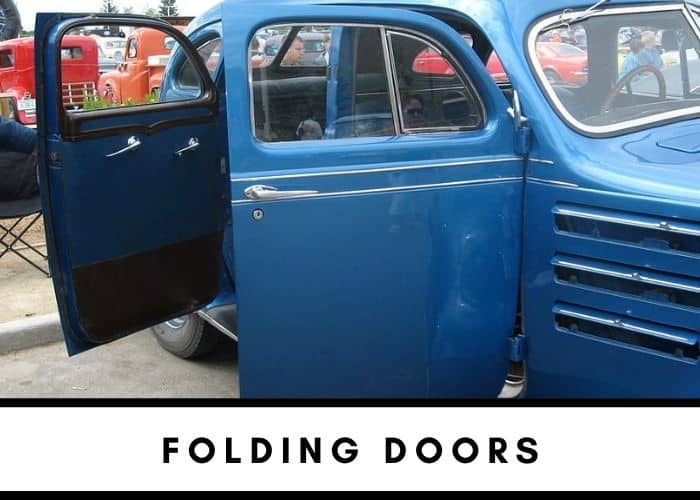 Types of cars with reverse-opening doors:

Dihedral synchro-helix car doors are an innovation to make it easier for drivers to get into and out of their vehicles.

This technology allows a car door to rotate to open and close the door while also preventing the door from being hit by passing objects. 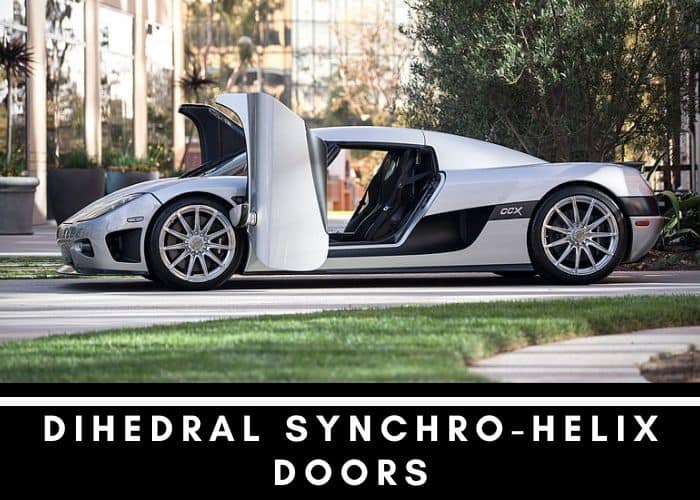 Here are the types of cars that have dihedral synchro-helix doors.

The station wagon tailgate door is also known as the hatchback door or liftback door. It is a type of car door that opens down or sideways.

It is typically located on the vehicle’s rear and opens to access the cargo area. The tailgate car door is usually hinged on the left side and swings open in an arc shape.

Station wagon tailgate doors are often used on cars that are station wagons.

The most common types of station wagons have a tailgate door, but there are some models that do not have one. 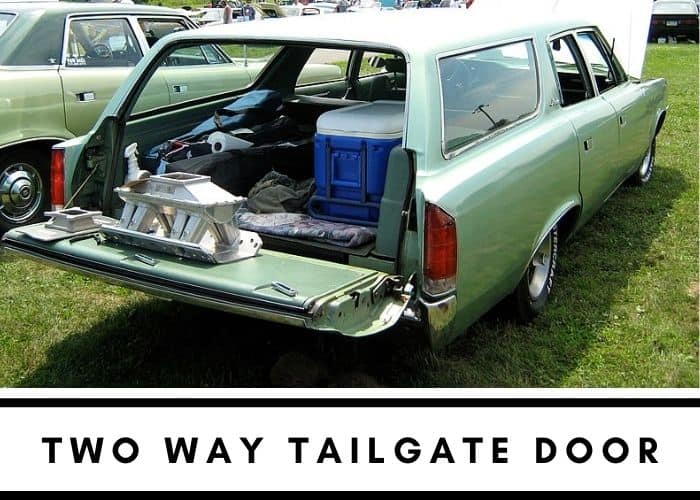 Here are some common types of cars with station wagon tailgate doors:

Canopy doors are a type of hinged door raised above the roof of a vehicle. You can find canopy doors on sports cars but you can also find them as an option on many other vehicles (like trucks).

Canopy doors are often referred to as cabriolet doors because they are used on convertibles before being adapted for hardtop vehicles like sedans and coupes. Other names for this type of door include convertible, convertible top, or canopy. 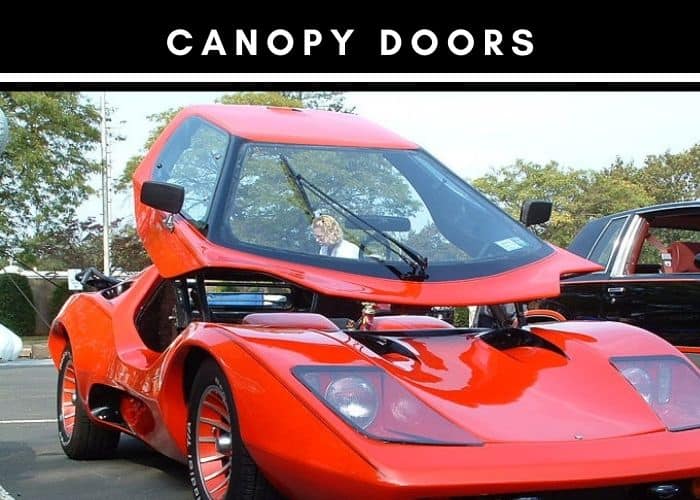 Below are the types of cars with canopy doors:

A disappearing car door or doorless is a door that folds into the side of your vehicle, and then when you want to use it, it pops out.

The doors disappear into the car when you don’t need them, so they take up less space and can be moved more easily — plus they’re protected by the vehicle’s frame when folded.

You can find this kind of door on many different cars, but its most famous implementation is in the Tesla Model X.

It’s not just cool-looking; it also makes getting in and out easier for everyone involved.

It allows for a larger interior space making it easier for passengers to get in and out of vehicles. 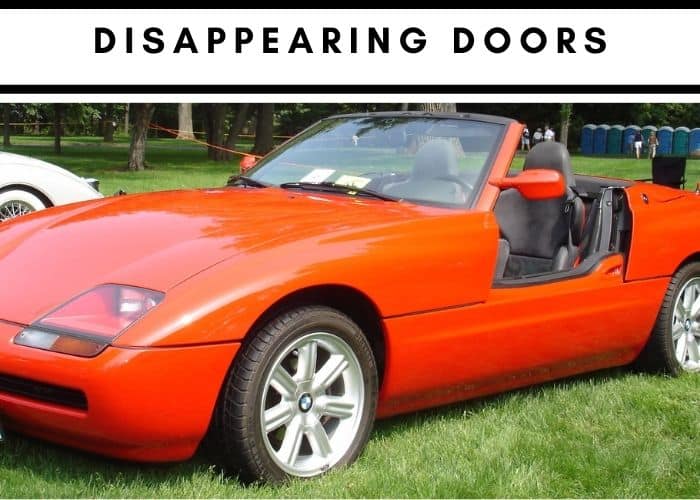 Sliding pocket car doors are great for people who don’t have a lot of space to store their cars.

This type of door has two parts: a sliding door and a pocket door.

The sliding door is attached to the outside of the car, while the pocket door is on the inside.

When you open the sliding door, it pulls out into its track to allow you access to your vehicle. When you close it, it pushes back into its pocket until it’s fully closed. 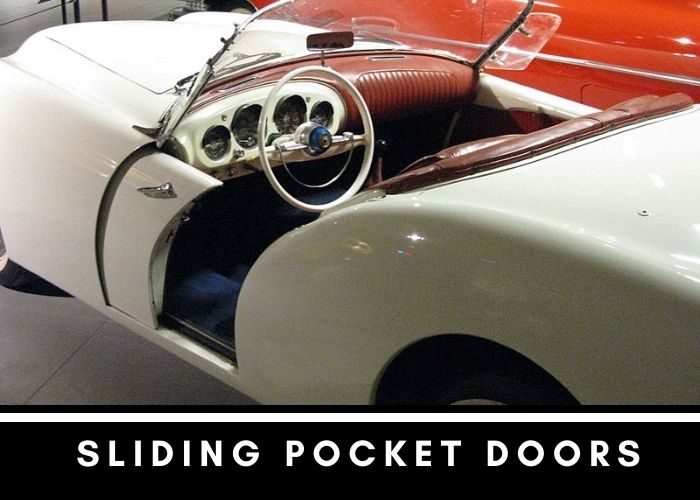 The types of cars with sliding pocket doors include:

Outward-sliding doors open outwards and away from the vehicle, making it easier for you to get in and out of your car.

This type of door is called an outward swivel door or an extended sliding door because it extends outward from the vehicle instead of opening inward of the vehicle.

Cars with outward sliding car doors can have one to four-door cars. 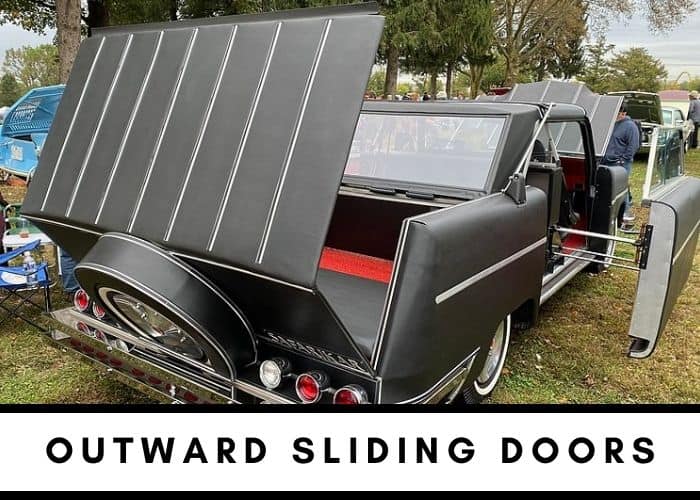 Here are some examples of cars with outward-sliding doors:

Swan doors are a type of car door that retracts into the vehicle. They’re named after them and resemble a bird’s wings that fold back when it’s ready to take flight. Swan doors are an alternative to gullwing doors. 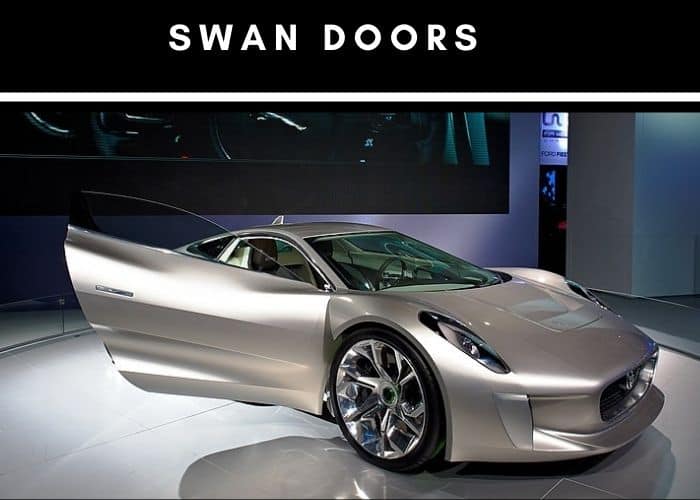 Here are some types of swan doors:

What’s the difference between a rear door and a passenger-side door?

What’s the difference between an overhead door and a sliding door?

What’s the difference between an open-top car and an enclosed car?

An open-top car has no roof, while an enclosed car has a roof.

Can a car have more than one type of door?

Yes! Some cars have four doors—two at the front and two at the back. Others have two doors on each side, so you can get in from either side of your car. And some cars even have no doors.

What are some of the types of car doors?

There are many different types of car doors, including sliding, swinging, and gullwing. Each type has its purpose and benefits, so it’s important to know what they are before deciding which one works best for you.

How do I know which type is right for me?

You can visit your local mechanic or dealership before selecting if you want more information on each type of door. They’ll be able to give you an idea of what features make each type unique so that you can choose what’s right for your lifestyle.

What is the difference between a front-hinged and a rear-hinged door?

What is the difference between a cabriolet, a soft-top, and a convertible?

We hope we’ve provided you with some insight into the different types of car doors and how each can present benefits for you in your next vehicle purchase.

There are rear-hinged split doors for extra ventilation to sliding doors that minimize the area opening outward and away from the vehicle.

You can get butterfly doors that maximize sitting space in the back of the car without compromising safety — each style has a story behind it. 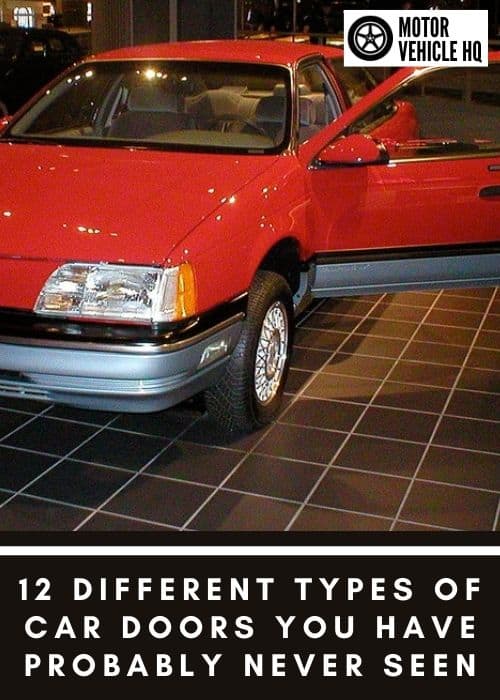 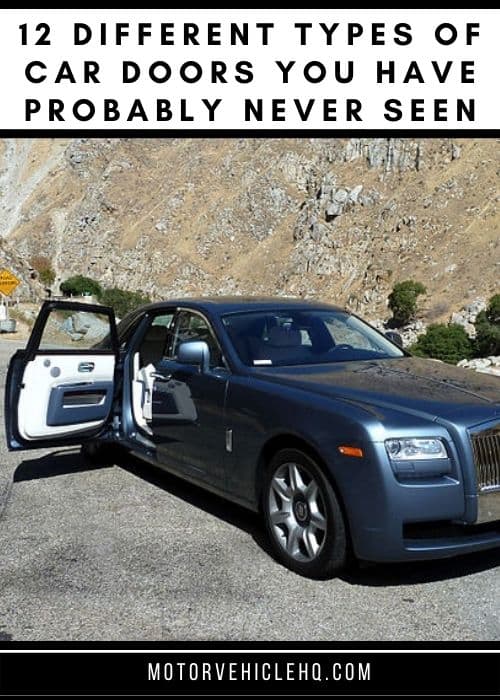